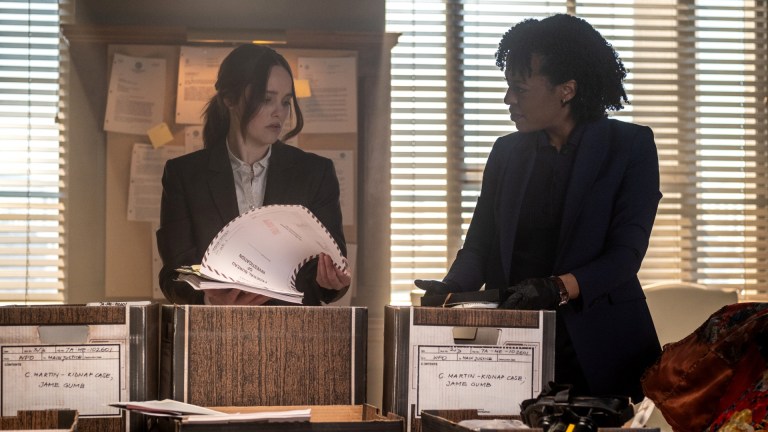 Clarice, episode 10, “Motherless Child,” finally addresses the elephant in the room. Well, almost. The Silence of the Lambs spinoff is a series of almosts. Agent Clarice Starling (Rebecca Breeds) almost gets killed every episode, as well as nearly always coming to the edge of getting fired, sometimes twice in an installment.

Tonight, Clarice almost helps Catherine Martin (Marnee Carpenter), who almost kills Buffalo Bill’s mom, Lila Gumb (Maria Ricossa). She also almost helps Attorney General Ruth Martin (Jayne Atkinson), who nearly fires her for it. Ultimately, neither one gets what they want, while Starling gets to decide what they deserve. Lila, who never wanted anything to begin with except to be left alone, loses even that. With great power comes greater entitlement.

Clarice also almost derails Agent Ardelia Mapp (Devyn Tyler) in her fight for equal representation within the FBI. Adelia is set to deliver the complaints of the Black Coalition to the Bureau. It feels like she’s just about to walk out the door, when Clarice asks her to help find Lila Gumb. The infamous serial killer’s mother went to great lengths to distance herself from the son who was taken from her when he was two years old. Clarice has hit a dead end after being asked personally, by the attorney general, to find her daughter. Luckily, Adelia, the perennial cold case agent who is a whiz at everything else, is able to dig through the double blinds in time to get out the door.

Agent Murray Clarke (Nick Sandow) is full of surprises. His entire character is formed on assumptions which people make of him based on his crusty exterior. A few episodes ago, Agent Esquivel (Lucca De Oliveira) thought Murray was going mad with power when he was just dealing with his own familiarity with victims. Tonight, Julia Lawson (Jen Richards), the accountant who is connecting the dots which link the River Murders and Alastor Pharmaceuticals, assumes Murray is holding his tongue on a gender reassignment inquest, when all he’s interested in is what dye she uses on her hair. It may be a ploy to get out of a socially awkward situation, but it is subtly effective in expanding both characters’ makeup. It also inadvertently shadows what is happening at the Gumb household.

Catherine doesn’t set out to hold Buffalo Bill’s mother at gunpoint, but is triggered by a cosmetic product: the smell of the skin cream she was smeared with in the hole in the ground. The arc of the turnaround in the Gumb household is well done. When Catherine takes Iris hostage, she is looking for impossible answers about how Buffalo Bill came to be such a monster. She bashes her skull in by mistake, but that seems to make the conversation easier. The two women are both broken creatures circling each other while backed into a corner. The performances are a little overwrought, but have regular release valves. It would probably have led to some kind of closure if they weren’t interrupted by the renowned FBI agent who closed the case.

“Lila, this is the bitch that killed your son,” Catherine says by way of introduction, and the audience can relate. Clarice may strive to be all things to all people, but she’s not a “people person.” Interrupting the volatile situation as it hits its peak must be profoundly satisfying for Agent Starling. She has the upper hand on two deeply disturbed individuals tied to her by trauma. Clarice loves to see how far it can stress disorders.

Clarice finally references Hannibal Lecter. Can I say that? They don’t use his name, of course. “You made a back door deal with a serial killer,” Deputy Assistant Attorney General Paul Krendler (Michael Cudlitz) spits at Attorney General Martin after Clarice blips off the radar again. “We sprung a maniac from confinement where he eviscerated two cops and a paramedic, and god knows who else,” he finishes. It sounds like a premise for a pretty good show. But, of course, no one wants to talk about that.

“Motherless Child” highlights the artistic distance between Clarice and Hannibal. The show which followed the epicurean psychopath was an uninhibited foray into uncharted ethical territory, guided by an untethered moral compass. Clarice adheres to the rules of procedural cop shows, relies too much on the trope of the officer who won’t follow procedures, and then saddles her with constant self-reflection. Clarice is the rogue cop everyone either has to worry about, or wants to throw into a shark tank. Krendler can’t trust her not to kill herself, the attorney general sees Starling as reusable chum.