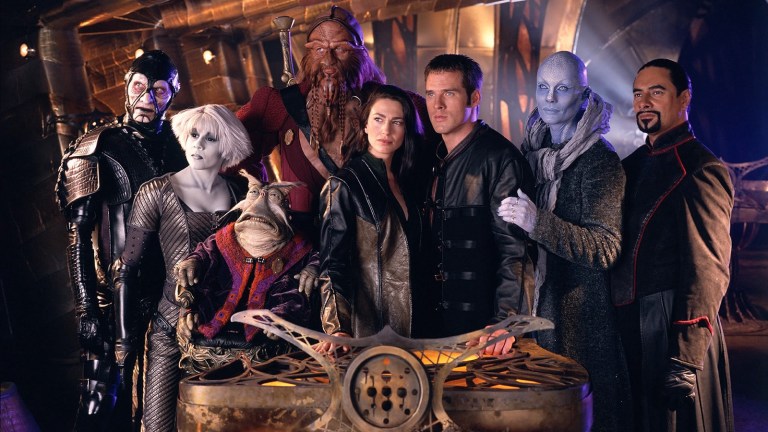 These Are the Voyages…

“Ensemble crews are one of the quickest and most powerful ways to forge a found family.  A foundational example for me was Blake’s 7,” says Paul Cornell, who has written stories for the Star Trek: Year Five comic series among his many speculative fiction credits. “They haven’t been recruited, they have relative degrees of distance from the cause, they’ve been flung together.  The most important thing is that they’re all very different people.”

It’s a formula that has been repeated over and over for about as long as there has been science fiction on television—starting with the likes of Star Trek and Blake’s 7, through the boom in “planet of the week” style TV in the 90s and 00s with Farscape and Firefly, to more recent stories like Dark Matter, The Expanse, Killjoys, and the Guardians of the Galaxy films. Most recently Sky’s Intergalactic, and the Korean movie Space Sweepers have been carrying the standard, while last month saw people diving back into the world of Mass Effect with Mass Effect Legendary Edition. While Commander Sheppard is ostensibly the protagonist of the video game trilogy, few would argue that it’s anything other than the ensemble of the Normandy crew that keeps people coming back.

As science fiction author Charlie Jane Anders points out, it’s not hard to see the appeal of a family of likeable characters, kept in close quarters by the confines of their ship, and sent into stories of adventure.

“I love how fun this particular strand of space opera is, and how much warmth and humour the characters tend to have,” Anders says. “These stories have in common a kind of swashbuckling adventure spirit and a love of problem-solving and resourcefulness. And I think the ‘found family’ element is a big part of it, since these characters are always cooped up on a tiny ship together and having to rely on each other.”

Over the years the Star Wars franchise has delivered a number of mismatched spaceship crews, from various ensembles to have crewed the Millennium Falcon, to the band of rebels in Rogue One, to the crew of the Ghost in Star Wars: Rebels.

That energy was one of the inspirations for Laura Lam and Elizabeth May, the writers behind Seven Devils and its upcoming sequel, Seven Mercies. In Seven Devils, a team of very different women come together aboard a starship stolen from an oppressive, galaxy-spanning empire, clashing with each other as much as the regime they are fighting.

“So many of these stories are what we grew up with, and they were definitely influences. The scrappy people trying to make a living or rebel against a higher power, or the slick luxury communism of Star Trek,” says Lam. “What’s great and terrible about space is how you are often stuck on a ship with people, for better or worse. That isolation can breed really interesting character conflict and deep bonds. You have to have your crew’s back, otherwise space or alien plants are too large or dangerous [to survive].”

While the “Seven” duology is very much inspired by this genre of space adventure, it also brings these stories’ underlying political themes to the surface.