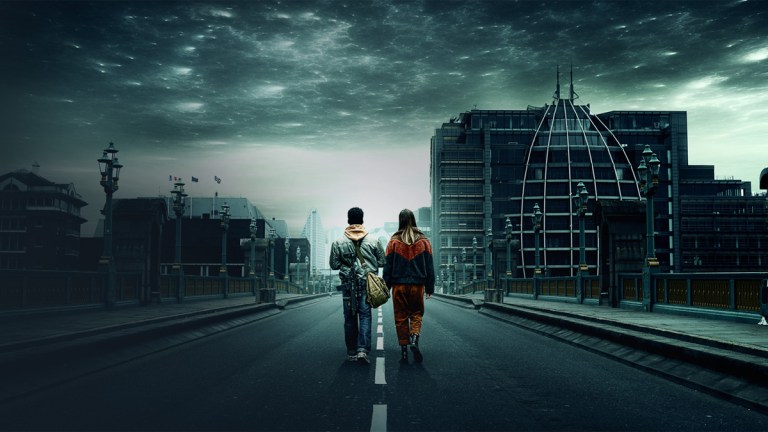 The first thing to remember about Howard Overman’s moodily atmospheric War of the Worlds is that if novelist H.G. Wells were here today (and had the required TV streaming package), he probably wouldn’t recognise it as his story. Aside from an alien invasion that wipes out much of Earth’s population, the TV drama had little crossover with Wells’ novel. Instead of tripods with heat rays, it had cyborg dogs with machine gun heads. Instead of a solitary journalist wandering around Woking, it had a large cast of scientists, soldiers, teenagers and others, spread across the UK and France. Instead of dealing with themes of colonial imperialism, it was mostly about family and loss. And instead of red weed-spreading Martians it had… well, that’s the question. Ahead of season two’s arrival on Epix in the US and Disney+ in the UK, here’s the story so far…

The series one cliff-hanger appeared to reveal that the aliens behind the invasion were human, and dying. When London teenager Emily (played by Daisy Edgar-Jones) entered an alien ship, drawn there by what seemed to be her psychic link to the aliens, she saw a humanoid with the exact same circle-inside-a-circle tattoo as her. In some mysterious way, the invaders were connected to her.

Before the invasion, Emily had been blind as a result of degenerative condition Stargardt disease. After the alien ships landed, whenever she was close to a ship, or to the killer cyborg dogs that formed the invaders’ vanguard, Emily regained her sight in black and white. The murderous cyborgs didn’t attack her, and when she touched one, she had a vision of herself with a young man she didn’t recognise. Emily could feel what the aliens were feeling: they had come to Earth because they wanted to live.

Emily Gresham was part of a group of survivors in central London, which included her mother Sarah (Natasha Little) and younger brother Tom (Ty Tennant). The family had survived the aliens’ brain-destroying magnetic wave because they were in an underground car park when it was triggered. Anybody underground, underwater, or surrounded by metal survived. That left the Gresham family (whose dad Jonathan was in Paris at the time of the attack and also survived the wave when his taxi drove into the river), neuroscientist Bill (Gabriel Byrne) and his ex-wife Helen (Elizabeth McGovern), who were in a metal elevator at the time of the wave, and former child soldier Kariem (Bayo Gbadamosi), a refugee who’d entered the UK smuggled inside a tanker. The group joined up with hospital worker Ash (Aaron Heffernan), whose pregnant fiancée had died in the first attack.

Bill and Helen’s son Dan had also survived the wave in a government bunker, but he was killed by the cyborg dogs soon afterwards. When Dan’s parents discovered his body, Helen made Bill promise to find a way to destroy the aliens. They took an inactive cyborg dog to Bill’s university laboratory where he performed tests and discovered that it contained a very simple organic organism and therefore was just a foot soldier created by the real invaders, who had yet to show themselves. Bill planned to develop a biological weapon that would wipe out the invaders, but before he could, Helen was shot dead by one of the cyborgs. Emily was unharmed in the attack, which made Bill mistrust her and her mysterious connection to the aliens.

Meanwhile, in Paris, Emily and Tom’s dad paired up with Frenchwoman Chloe (Stéphane Caillard) to travel together in safety. He wanted to return to his family in London and she wanted to find her teenage son Sacha (Mathieu Torloting), who was being raised by her parents. In Amiens, Chloe found her parents dead, but Sacha and her older brother Noah alive. It was revealed that Noah, who was suffering from the early stages of muscular dystrophy, was Sacha’s father as well as his uncle. He had raped his sister when she was 15 years old, resulting in Sacha’s birth.

When Sacha learned what Noah had done, he allowed him to be killed by a cyborg dog, and gradually became more and more untrustworthy and violent. Sacha had survived the brain-frying wave despite not being underground or underwater, and shared the same connection to the cyborg dogs as Emily. They didn’t attack him, and when he touched one, he saw a vision of himself with a pregnant future version of Jonathan’s daughter Emily, whom he recognised thanks to a family photo he stole from Jonathan. That trio ended the season on their way to the UK to help Jonathan find his family, but secretly, Sacha was really going there to find Emily.

Also in France, at the Grenoble Observatory, scientist Catherine Durand (Léa Drucker) was investigating the alien invasion. She learned that they had landed on Earth exactly one year after her team of astrophysicists had sent a signal into space containing a recording of the Nick Cave song ‘Into My Arms’, which the aliens had intercepted. During that time, the aliens had completed a full scan of the Earth and its people’s DNA.

War of the Worlds season two is currently airing on Canal+ in France, starts on Epix in the US on Sunday the 6th of June, and is due to arrive on Disney+ in the UK from July.