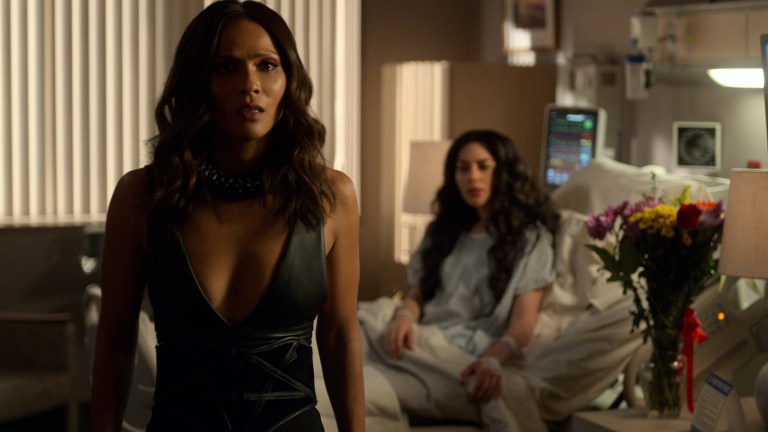 “That’s what you get for bringing a beanbag to a demon fight.”

Love is in the air, and as long as the principals don’t overthink things too much, everything should work out that way God intends it. We just don’t know who’ll be taking over should Lucifer’s father make good on his intent to retire. Since a peaceful transfer of power doesn’t appear imminent, “A Little Harmless Stalking” takes the opportunity to deliver some of the series’ most poignant and heartfelt moments, and Lucifer appears on track to continue breaking new ground in its quest to dig deeper into the human psyche.

First things first. Talk about burying the lede. “I’ve just decided. I’m going to be God.” As delicious as it is to consider a replacement for The Man Above, after the last episode, it’s not surprising that we’d reach this situation and the brotherly battle that is almost certain to occur. And boy, talk about a redemptive arc should Lucifer actually get to take over for his father. It’s a plot thread rife with narrative possibilities, and “A Little Harmless Stalking” puts Amenadiel smack in the middle as he conducts a little unexpected market research with a rabbi, an imam, and a priest.

When you think about it, however, Amenadiel’s desire to seek advice regarding arguably the most important job in the universe is just so Lucifer. Dan probably doesn’t understand all of the familial subtext that goes into Amenadiel’s admission that “I think I’m going to become God,” but his casual reaction plays nicely against the angel’s angst regarding the situation. Nonetheless, it’s his conversation with Ella that should shape his decision. She bares her soul in an emotionally charged admission that catches Amenadiel by surprise, though he recovers nicely and tells her that her low self-worth regarding her relationship with God is completely unfounded. If this were the job interview, he’d be immediately handed the keys to the kingdom.

Nevertheless, Lucifer is, at its core, a crime drama, and the murder of a man in the middle of a stolen art scam provides the perfect opportunity to reintroduce Linda’s biological daughter into the story while playing wonderfully to the established “act rather than think” theme. Not for a second do we think Linda killed a man, but the crazy driving scene that opens the episode does give us pause. Ella filling in Chloe and Lucifer at a crime scene never gets old, and Dan’s “you’re not going to believe this” announcement sets up Lucifer to use his mojo on the suspect. Linda admits she wants to “protect my child,” and of course we assume she means baby Charlie who’s come under any of a number of attacks since he’s been born. The mini misdirect leads us into the heart of the story as the next suspect, Linda’s biological daughter Adriana (Alexandra Grossi), turns herself in, and the investigation gathers steam.

Given the nature of the episode’s theme, we hope it’s only a matter of time until Linda and Adriana come face to face, and the truth about their relationship moves into the open. First, however, Linda’s daughter must be cleared of the problematic admission that she killed Mr. Sterling even though, like her mother, it’s fairly clear that she didn’t. Lucifer and Chloe are at their best when they wheedle the truth out of suspects, but here, the truth, at first, complicates our desire to see mother and daughter reunited. It’s a nice touch and gives some background other than her real estate acumen.

Now that Lucifer and Chloe have committed to being together, their public displays of affections might ordinarily be seen as gag inducing, but within the context of the story, it allows the writers to take a left turn and have Lucifer and Linda pose as a couple during a sting operation at the art gallery. Lucifer buys an expensive painting which he then gifts to the detective, and the details of the scam come into focus. Yes, Adriana has been part of the operation but only to secure funds for her seriously ill adoptive mother’s medical treatments. Once the detectives sort out the truth of the murder, mother and daughter get that moment we’ve waited for since she shows up in “Detective Amenadiel.” The writers pounce on the golden opportunity for Adriana to meet and hold her baby brother, and we’re now left to wonder whether this relationship will gain traction.

So while Linda’s been busy stalking her daughter, Eve returns to the story, and makes makes quite the entrance following Maze during the Sterling murder investigation. We get a couple of tightly orchestrated fight scenes, but the best involves the unexpected return of ninja Eve (Inbar Lavi) who nearly takes down the demon Mazikeen. She’s been on a journey of self-discovery, and it’s the realization that she’s in love with Maze that prompts her return. It’s sweet that she’s learned the bounty hunting trade to facilitate her bond with Maze, but we know this relationship is fraught with potholes even after the two women acknowledge their feelings for each other. Again, don’t over think; just lay your cards on the table.