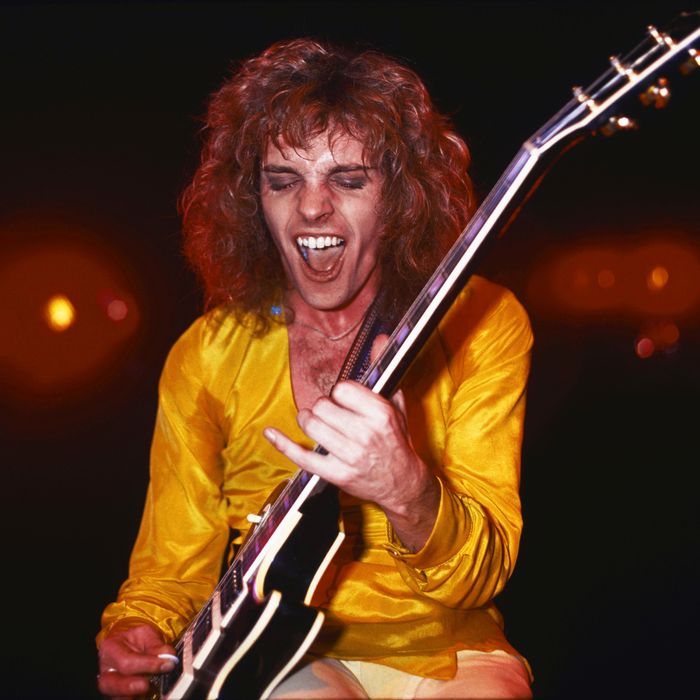 In 1976, nobody ascended to a sonic astral plane quite like Peter Frampton and his luscious locks: His live album, Frampton Comes Alive!, catapulted him from a respected rocker to a sex god among guitarists, with songs like “Show Me the Way,” “Do You Feel Like We Do,” and “Baby, I Love Your Way” becoming virtually inescapable from the airwaves unless you covered your ears. (It was so popular, in fact, some say it was mailed to all suburbanites with free samples of Tide.) But besides the obvious rock virtuosity — it was 1976’s best-selling album, and now in double-million-digit sales — Frampton Comes Alive! proved to be a fascinating case study for the man himself, positioning him as someone who could be as appealing to teenage girls as he was to their fathers. And to repeat, he can really shred that guitar.

The 45th anniversary of Frampton Comes Alive! finds the musician in a nice middle ground this month: Last November, Frampton published his first memoir, the gentle and entertaining Do You Feel Like I Do?, while on April 23, he’ll be releasing a new instrumental covers album, Frampton Forgets the Words. On the phone from his condo in Nashville recently, Frampton was happy to reflect on Frampton Comes Alive!’s colossal success, the career slump that followed, and, of course, the art of the talk box.

“Do You Feel Like We Do” is my favorite. I can’t imagine doing a show without that song. But I think there’s two. The other top favorite for me is “Lines on My Face.” I like playing it because it’s kind of a trance, including for us on the stage. It’s such a great vibe. The words that everyone hears — broken love affairs, marriage, whatever — as well as the music and soloing, the audience really responds. You can hear a pin drop when we play it. Everyone’s listening intensely and gets into the mood of it.

With “Do You Feel,” I didn’t realize I was writing the best hangover song ever. That’s what I had when I wrote it! [Laughs.] That’s why the beginning is: “Woke up this morning with a wine glass in my hand / those are the good old bad days.” I’m now 18 years with no alcohol and I’m very proud of that. It’s one of those songs where it’s everybody’s song. They all sing it. It’s an “up” song. Most people know what I’m talking about with the hangover and full ashtray of dead cigarettes by the bed. That’ll send you straight to the bathroom. People identify with that. It doesn’t matter what mood you’re in, and I think that goes for the whole album. Even if you weren’t feeling that great before, there’s great joy in that song. It’s like, Fuck you, I’m gonna have a good time! It’s become an anthem for people and for myself.

We had originally budgeted for a single album — it definitely wasn’t going to be a double. The only songs that were on the single album when we were mixing it and preparing for its release were “Lines on My Face” and “Do You Feel,” because of how long they were. And then “Something’s Happening,” “Doobie Wah,” and I believe “(I’ll Give You) Money” was the last one. But then Jerry Moss, who’s the “M” in A&M Records, paid us a visit in the studio and we played him both sides of the single album. He said, That’s fantastic, but where’s the rest? We reiterated that we were budgeted for just a single album. He responded, Where are all of your hits? Where’s “Show Me the Way”? Where’s “Baby, I Love Your Way”? There’s no acoustics! So a lot were almost cut. It was only because of Jerry giving us the budget to mix and record some more songs that we were able to do it. Did he do the right thing? I think so. [Laughs.]

I’ll have to jump ahead from Frampton Comes Alive! and respond with “I’m in You.” Oh God, and the awful cover [art] with that. Maintaining the pop-y image of sagging pants and not wearing shirts. Everybody else had moved on a little bit at that time but I was still stuck. Time had stopped for me at that point. I wrongly thought I should stay the same. I should’ve reinvented myself in T-shirts and jeans for the “I’m in You” cover. Even though it was my only No. 1 single, it split the men up from the girls. For the whole Comes Alive! tour, it was definitely a 50/50 audience because the music was great. If I didn’t look the way I did back then, there wouldn’t have been so much attention from the women. I really believe it didn’t start to happen until after Comes Alive!, when I was on every magazine known to man with my shirt off. That stuff was wrong to do and those people around me had pushed me into what they wanted me to be. I let them do it to me up to a certain point. When I realized what was happening, it was too late.

It’s not that bad at all! I would say it’s pretty comfortable. [Laughs.] It might not look like it. I’m basically biting it with my teeth to close it down and open it up to get different sounds. The first song that we introduced it into before anything was recorded was “Do You Feel.” I had not done the Frampton album [1975] at that point, which I used on “Show Me the Way.” I remember the first time using it during a performance. It would’ve been opening the bill of a three-act show or, if we were lucky, the middle act. It was at the end of “Do You Feel.” It felt like the audience moved 24 inches closer to me. I looked around at the guys and I couldn’t believe it. The effect was instantaneous. What the hell is that? It’s humorous! It’s not humorous when Joe Walsh plays the incredible solo in “Rocky Mountain Way,” which I think is the definitive talk-box solo. There was no auto-tune, there were no vocoders at that point. It had this giant effect on the audience. By the end of the talk-box solo, I had the audience in the palm of our hand.

It’s got to be “Lines on My Face.” It’s a very peaceful type of song. It goes to a climax within the solo and within the chorus, but the verses have a very easy-going and smooth vibe. And everyone can identify with the lyrics. [Sample: “Lines on my head from that one thing she said / She spoke of strangers that don’t sleep two a bed.”] I’m sure a lot of people would say “Baby, I Love Your Way” is the most romantic. Maybe it is for a lot of people, but “Lines on My Face” is the one for me.

Oh gosh, is there any part of the album that didn’t get attention? [Laughs.] I’m trying to think of all of the songs on there. I really don’t think that there was anything overshadowed. People generally listened to it from beginning to end. Even nowadays when you can pick a track, it’s hard to pick out something. Even with the acoustic numbers you’ve got “Penny for Your Thoughts,” which is a lot of people’s favorite part of the album. I would’ve said maybe the acoustic numbers, but I don’t think so.

Not to sound like a broken record, but it’s the solo from “Lines on My Face.” It’s such a powerful number and such a big part of me. That one is always different every night. I never play the same thing twice and never wish to, but that one is something I always feel I do a pretty good job on every night. The song has been with me so long. There has to be a reason for why I wanna do it every night and I don’t know what it is. Part of it is because I’m a creature of habit, and not only does “Lines on My Face” set the tone of the evening, but it sets my tone too. It allows me after two songs of rock and roll to calm down. The nerves are gone. I’m on the stage and in control. I get to do that number and it just centers me.