A Brief History of Ariana Grande’s Obsession With Driving Metaphors 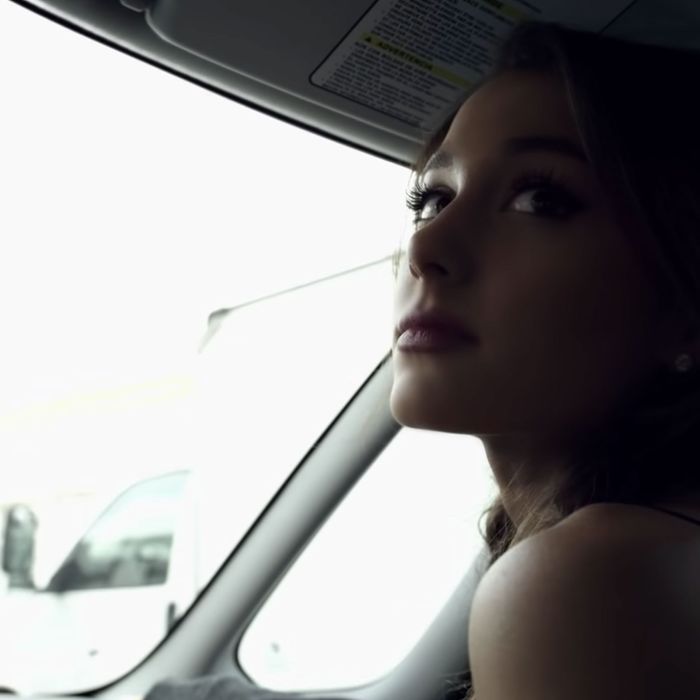 Ariana Grande simply loves to drive. This was most recently evidenced in her Netflix tour documentary, excuse me, i love you, in which she calmly drove herself to her own headlining concert at the Staples Center — an unusual sight for someone of her level of celebrity and also her height. It’s all the more unusual for someone who has crashed their car on the way to Big Sean’s house. But Grande is, as we have long established, an unusual person. A Los Angeles resident with deep Floridian roots who has not spent much time living in walkable cities, Grande has spent years of her life behind the wheel, blasting the AC beneath a broiling sun, sporting gigantic glasses, and likely atop some kind of booster seat.

As any artist worth their weight in raw asphalt would, Grande often uses her work to explore the themes of her personal life — namely, driving. This week, she released a new song, “test drive,” on the deluxe edition of her Positions album; after “34+35,” it marks her second song of the Positions era to explicitly reference operating an automobile, and it’s one of dozens of songs throughout her career in which she uses the activity as a metaphor for her second-favorite activity, sexual intercourse. And it has left me with some burning questions: What is it exactly that draws Grande back, time and again, to engaging in and singing about the pleasures of the open road? Is it about the innate sense of solitude offered by driving, the respite from the incessant act of celebrity? Is driving herself, instead of being driven by a trained professional, about retaining a level of autonomy and groundedness during what must be an increasingly surreal rendition of the human experience? Or is it actually just a sex thing?

Grande’s need for vehicular speed began with her very first song on her very first album, 2013’s “Honeymoon Avenue,” which employs the art of driving as a song-length extended metaphor for a failing relationship. Off the bat, and rather jarringly, Grande evokes a fiery and fatal car wreck: “I’m ready to make that turn / Before we both crash and burn / ’Cause that could be the death of us, the death of us.” She also takes the opportunity to needle her soon-to-be ex about his subpar sense of direction: “Baby, you know how to drive in rain / And you decided not to make a change / Stuck in the same old lane / Goin’ the wrong way home.”

Two songs later, on “Right There,” Big Sean himself (of “driving to Big Sean’s house and getting in a car accident” fame) references Grande’s love for getting takeout from a drive-through window: “Five-course meals / Even though you don’t mind a drive-through.” It’s possible that Grande appreciates driving as a simple way to feed herself as a woman constantly on the go.

On the intro to her second album, My Everything, Grande gets straight to the point, asking her lover to drive with her into what I am choosing to interpret as the afterlife: “Love me and don’t look back / I want you with me on this road to the sky.” Grande, like many esteemed artists before her, understands that operating a very heavy machine is a double-edged sword, representing freedom but also the real possibility of death — an idea she visits again in the video for “One Last Time,” in which she is the passenger in a car headed straight for the apocalypse, with her boyfriend pleading, “Don’t get out of the car!” (She does and then the apocalypse happens.)

Meanwhile, “Bang Bang,” Grande’s three-way belt-down with Jessie J and Nicki Minaj, boasts more playful driving references: Jessie describes a woman as having a “booty like a Cadillac” that “can send you into overdrive”; Minaj’s verse references Ferraris, engines, and powder-blue four-doors; and all three women invite a lover to “bang bang” in the “back, back seat of my car” on the chorus, which is less of a metaphor than a literal description.

“Break Free,” famous for its lyrical opacity, sees Grande sharing that her lover’s “spell” is “like a deadly fever / on the highway to hell,” which I can’t make heads or tails of even six years later. I suppose one could interpret this as Grande being as hot and upset as physically possible — spiking a fever while driving straight to hell. Perhaps she is merely describing the experience of driving in Los Angeles. Later, on “Cadillac Song,” Grande discards such murkiness to clearly state that she is “Riding round in my Cadillac / Thinking ’bout the day that I first saw you.” The song is free of metaphor and instead is meant to paint a distinct visual: Grande, sitting on four phone books, driving her Cadillac around and weeping.

On her third album, 2016’s Dangerous Woman, Grande pushes the car imagery into, forgive me, overdrive. As on both earlier albums, the first song, “Moonlight,” directly references Grande’s old-school love of car-fucking: “He’s so bossy, he makes me dance / Tryna sit in the back of his whip and just cancel my plans.” The lyrics for “Everyday” — a song about doing it every day — reference cars only briefly, when Future raps, “I got your body and put it in drive, baby / Like I got keys in,” but the music video employs the automobile as a thematic centerpiece, featuring couples having sex on top of one while Grande watches, cheering them on. On “Bad Decisions,” Grande shouts-out car-horny icons Bonnie and Clyde; oddly, on “Side to Side,” Grande references every other type of transportation — tricycles, dick bicycles, walking — but suspiciously avoids cars, perhaps understanding on some level that she has made her point vis-à-vis cars and sex.

Underscoring this idea, there is nary a car reference to be found on Sweetener, save for Minaj playing loose with the image of a firearm out a car window: “Now we shooting the shot like drive-bys.” (During the Sweetener press tour, however, Grande did appear on “Carpool Karaoke,” likely in a subtle nod to her career-long car fetish.) But on thank u, next, Grande is yet again vrooming, albeit much more sadly. On “imagine,” one of Grande’s most viscerally devastating songs, she imagines getting out of the car for a change — specifically, “like skrt.” Grande begs a friend to “walk me to my car / If I go alone, I’m not gonna make it very far” on “fake smile,” explaining that she is exhausted and “starving” and tired of putting on a happy face for strangers. As on “Cadillac Song,” Grande’s car here represents an escape, a hideout of sorts where she can excuse herself from the omnipresent specter of public expectation.

Though the lyrics for the pro-capitalist anthem “7 rings” do not expressly reference any sort of vehicular activity, the implication is that Grande and her friends are in a car during their Champagne-fueled credit-card spree, or else where would they put everything? The video and the accompanying tour imagery confirm this, centering on Grande & Co. rolling around on top of a gigantic pink graffiti-ridden automobile, suggesting that for Grande, the idea of placing one’s body on the hood of a car is the apex of luxury. The same applies to “thank u, next” — though Grande does not sing about cars, she spends much of the music video driving around in one, accompanied by a tiny Chihuahua.