Lucifer Season 6 Episode 4 Review: Pin the Tail on the Daddy 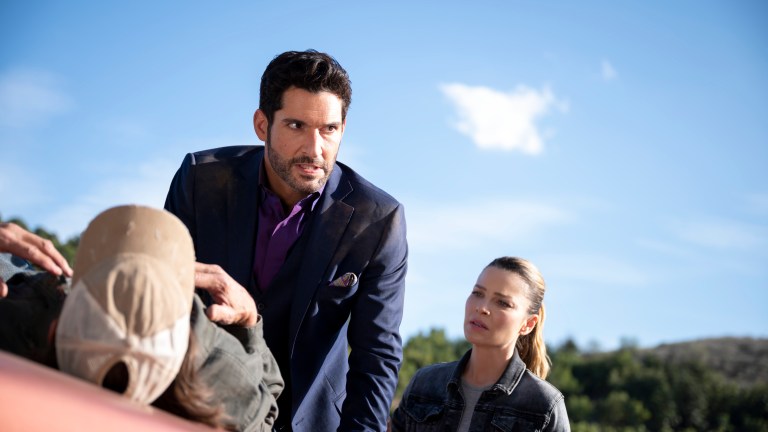 “Why does everyone think beaming up is a thing?”

There are narrative bombshells, and then there are nuclear warheads. “Pin the Tail on the Daddy” takes Lucifer explosively into a totally unexpected sphere, but it’s one that should facilitate his ascension and the beginning of his tenure as God. Still, nothing’s ever that easy, is it?

Though Lucifer repeatedly contends angels can’t father children, his brother Amenadiel stands as proof that things, at least on Earth, have obviously changed. Little Charlie’s timeline makes perfect chronological sense, but the newly arrived daughter of Lucifer and Chloe presents significant challenges as we attempt to explain how it is that she even exists in the first place. For a brief time it appears we have a name to go along with the wings, but it’s Mira and her dad’s touching account of their moment of truth that allows Lucifer to see his situation in an entirely new light.

Before we examine Lucifer’s quest to find the mother of his alleged daughter, it’s time to acknowledge the writers’ deft handling of Daniel’s return to the story. I’ve never been a fan of shows bringing dead characters back to life, but within the context of the fantasy drama, it’s difficult to argue with the narrative choices made by Lucifer’s writing staff. Yes, it’s a trope that no one can see Dan as he returns to the LAPD precinct, as is his physically translucent form, but his encounter with Ella reminds us that spirituality remains an important staple of the show.

When Dan ventures to Lucifer’s penthouse, he finds Mazikeen being fitted for a new wardrobe and is further discouraged when even a celestial can’t see or hear him. Of course, we suspect she’s just messing with Dan, and when he encounters Amenadiel and Maze at Lux, the truth is revealed. It’s a nice scene as Amenadiel and Dan share a moment related to the angel’s desire to join the police force, but it’s the failed attempt at a group hug that nicely sets up Daniel’s most important contribution.

Nevertheless, “Pin the Tail on the Daddy” makes it painfully clear that Lucifer has much to learn if his relationship with Chloe is to survive. He essentially admits lying to Dan about lacking the ability to take him out of Hell, and then when a highly-caffeinated Chloe questions Lucifer about her future as God’s consultant, he deliberately omits the news that he may be a father and that the angel in question has flown her ex-husband from Hell to Earth. She’s rightly concerned about how Trixie will fit into their new life, and while he tells her that “When I’m God, I will figure things out,” his mind is really elsewhere. It’s a fair concern that finally gets some air time.

After consulting with his brother, Lucifer realizes his 1999 trip to Earth for an evening or two of intense debauchery may be the source of the alleged procreation, and thus begins a humorous journey to learn the mother’s identity. However, it takes Chloe a sit down with Doctor Linda to realize she needs to more vociferously voice her own desires to Lucifer. It’s an important scene because Chloe still isn’t totally secure in her relationship with Lucifer and asks Linda, “What are the chances he’d run off to Vegas and marry a stripper twice?” Amusing line? Yes, but Linda’s sage advice to just ask him then leads to a smile inducing follow up. Chloe has an app on her phone that gives her Lucifer’s whereabouts.

There are several hits and misses along the road to finding whether or not Lucifer truly has a daughter leading to one of Lucifer’s best lines of the episode. “I’m about to be the World’s Best Dad to seven billion people,” he tells the woman skeptical he’d even make a good father. Then there’s the intriguing rabbi Esther who provides the first solid clue with her missing daughter Mira. It doesn’t lead to any tangible information about the mother’s identity, but their exposure of the captive runaways provides Lucifer a chance to utter a witty, yet profound line that further reveals his intentions. He tells one of the young, abused women that if she ever needs anything, to say a little prayer. “I plan to be a boots on the ground kind of God.” It’s a line that’s easy to dismiss, but indicates and supports Lucifer’s resolute determination to consider others before himself.