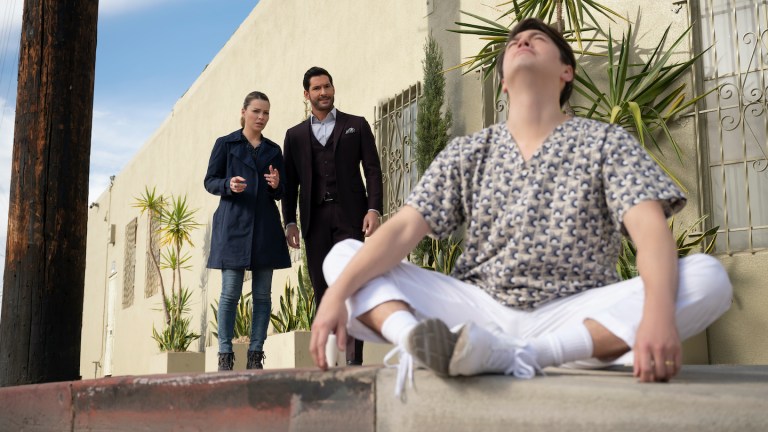 “I think it’s time for Detective Decker to make a comeback.”

It’s difficult to say which of the narrative reveals found in “The Murder of Lucifer Morningstar” will produce the most dramatic results as Lucifer reaches the halfway point of its final season. Nevertheless, Lucifer’s ascension to God’s throne seems to be on hold as his obsession with learning the truth about his disappearance from his daughter’s life moves to the front of the story line. And then there’s time travel.

Given the nature of Aurora’s tale of abandonment and the discovery that Ella suspects Lucifer of being the “actual Devil,” it’s possible we may have learned the identity of Lucifer’s killer. Of course, that presumes Lucifer meets his demise on August 4th or some time shortly thereafter. Though we only encounter Miss Lopez in one scene, the contents of her murder board indicate she’s pieced together a number of celestial truths that exist in her world.

However, it’s also not clear whether she’s simply bought into an overall conspiracy mantra. On the one hand, it’s puzzling that she hasn’t confronted someone about her suppositions, but there is the obvious problem that approach presents. It sounds delusional. Still, we now have to wonder whether her deep faith in God will lead her to take action toward the angel she perceives as being the embodiment of pure evil should she obtain any substantial verification.

Nevertheless, it’s Rory’s explanation to her parents that brings more clearly into focus the future facing Chloe and Lucifer, and now it’s up to the power couple and their daughter to alter the events that lead to “future child angst being faced by present day parents.” We don’t know yet how Lucifer will approach the rules of time travel, or if it will even be that concerned with narrative consistency in that arena, but like it or not, we must consider that Lucifer might die and nothing his team does can alter that fact. A bold statement I know, but only five episodes remain in the series, and the showrunners and writers have never been afraid to take risks.

One note before moving on concerns Brianna Hildebrand who is absolutely killing it as Lucifer and Chloe’s daughter Aurora, and the ice cream scene with her mom epitomizes the ease with which she’s joined the cast and integrated onto Team Lucifer. “It’s complicated, mom.” Actually, not so much. Interestingly, Rory self-actualized the ability to time travel through the intense anger she feels towards Lucifer for abandoning her as a small child, and though we still haven’t worked out the chronological details, as Chloe notes, she may already be pregnant in the present. It’s probably best not to get caught up in time travel intricacies and keep focus on the story at hand – what causes Lucifer to disappear from Chloe and Rory’s lives?

Even though she hasn’t experienced it yet, Chloe apparently enjoys a wonderful relationship with her daughter whose droll sense of humor can only come from one place. Teasing Aunt Eve, Aunt Maze, and Uncle A when they run into each other at Lux sets the tone for Rory’s insertion into the family and lets everyone know the new angel in town can more than hold her own.

That said, the opportunity to watch her parents at work gives Rory an insight into the father she never had. And though she observes that Chloe “carries” Lucifer as the pair attempt to “solve a murder that hasn’t happened yet,” she more importantly suggests that Chloe knows the exact circumstances surrounding Lucifer’s disappearance. She just doesn’t know yet that she knows. And it’s always entertaining to watch the kid squirm at the mention of parental intimacy. “Please don’t do your sex math in front of me,” Rory tells them as they calculate when their daughter might have been conceived.

With only five episodes of Lucifer remaining, “The Murder of Lucifer Morningstar” still manages to keep us on edge with fresh story arcs and compelling new characters. Can Lucifer’s family change the future and prevent his daughter from growing up fatherless? Did I mention time travel?