Lucifer Season 6 Episode 6 Review: A Lot Dirtier Than That 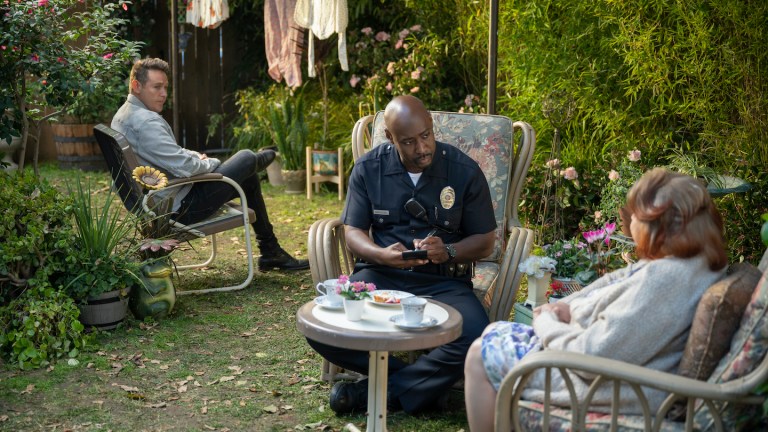 “You may have just met me, but I’ve known you my whole life.”

Some might say that “A Lot Dirtier Than That” comes across far too heavy handed in making its arguments about racial injustices involving the police, but sometimes it takes a sledge hammer to get people’s attention. Lucifer rarely engages in social commentary, but here it’s Amenadiel’s second brush with a bigoted detective that forces the angel to reevaluate his role as a black man working in law enforcement and puts on open display the challenges facing both the community and the men and women in blue.

Merrin Dungey as Amenadiel’s partner and mentor Officer Harris turns out to be more like the rookie cop than he initially imagines. “There’s the battles, and then there’s the war,” Harris tells Amenadiel, who can’t understand why she doesn’t more aggressively fight racism in the police force. What’s clear about their relationship though, is that they bring out the best in each other, and Harris seems willing to acknowledge that it might be time to increase her aggressiveness against the LAPD power elite.

Amenadiel’s new career path provides a narrative change of pace now that Chloe and Lucifer no longer investigate murders for the LAPD. He’s learned a lot during his time in the City of Angels and has established a network of trusted advisers, so it’s only natural he consult Chloe and then ask Ella for help processing the crime scene. Never mind that he’s gone over his supervisor’s head, his drive to do the right thing supersedes any chain of command issues or departmental regulations.

Now a detective, Reiben arrives at the murder scene, and it’s here that Amenadiel and the viewer flash back to the season four episode in which Caleb, a young black man is nearly killed by over zealous officers, one of whom was the then Officer Reiben. There’s no subtlety to be found in this aspect of the story, and that’s for good reason. Reiben’s disingenuous speech to Amenadiel in the conference room coupled with the detective’s insistence that the black victim is actually the perpetrator leaves no room for any conclusion other than he’s learned nothing in the interim and has the full support of those calling the shots. A grim realization no matter how you look at it.

However, it’s during the brief standoff between the backup officers and the wounded victim Michaela that we recognize an even bigger obstacle facing Amenadiel. He clearly wants to get in the line of fire and is perfectly willing to take a bullet to save the young woman, but how, then, will he explain the fact that the bullet hasn’t actually done any damage. It’s subtle, but we recognize his reticence and understand his frustration in not being able to use his full powers to police the community. And then in a wonderful scene, Harris explains to the discouraged Amenadiel why she chooses to remain on the streets in lieu of a promotion and how she manages to do the job day after day. It’s an eye opener for him, but he could not have been assigned a finer partner to help with the coming struggles.

Well, it looks like Dan remains on Earth after all but must cope with the fact that only four people on Earth can see him. His penchant for messing with Amenadiel, however, is already feeling a bit tired, but as long as he engages in meaningful talks with other members of the team, then that minor flaw can be overlooked. Ella does her best to draw out Amenadiel, but the angel is far too focused on solving Kevin’s murders and clearing Michaela’s name. Ella’s getting closer, and at this point, it feels cruel that she’s been left in the dark. Does no one else on Team Lucifer realize this?

Of course, the main thrust of the episode and season revolves around Rory making peace with her father. While it’s likely we’ll eventually learn the circumstances surrounding Lucifer’s disappearance from her life, the real question is whether she can find it in her heart to forgive him if forgiveness is warranted. We get a good sense of the relationship she’s had with Chloe, and not surprisingly, the detective raises a wonderful young woman. Like Amenadiel’s angelic problems as a police officer, any reunion between sisters Trixie and Rory brings with it some hurdles that may not be so simple to overcome. Still, that the two grow up so close is a testament to Chloe’s mothering.

Sometimes we just have to marvel at what television writers are able to pack into a typical 45 minute episode. Lucifer is at its best when it explores the intricacies of human and celestial emotion, but sometimes a bit more is required. “A Lot Dirtier Than That” more than succeeds on that front.